By Ms. Shumin He and Mr. Tingxi Huo, Chofn IP

China has taken effective steps to curb bad-faith trademark filing and made some progress, particularly through the newly amended Trademark Law in 2019. The trend of bad-faith filing has been curbed to a certain extent, and hopefully, the situation can be further improved.

The bothered legitimate owners and business were sometimes blackmailed and reached confidential settlement with the squatters, but some fought back and won some landmark cases in recent years. The Supreme People’s Court (SPC) has demonstrated its attitude to curb bad-faith lawsuits through a guiding case and a typical case. We hope to introduce the legal basis and the two cases in support of the fight against the squatters through this article.

Although there are no specific provisions to regulate the relevant parties’ conducts in trademark lawsuits, the principles of good faith and fairness shall be applicable to prevent bad-faith lawsuits according to Article 7 of the Trademark Law, Article 4 of the General Principles of the Civil Law and Article 2 of the Anti-Unfair Competition Law as listed below.

The SPC officially announced its attitude toward bad-faith lawsuits or abuse of lawsuits through the two cases it re-examined in 2014 and 2018. One is the guiding case relating to the trademark “歌力思” (the Chinese transliteration of ELLASSAY), which is binding and shall be followed by all courts throughout China. The other is the typical case relating to the trademark “UL (stylized)”, which can be important reference for all courts, though not binding.

Suiyong Wang, a natural person who filed the same Chinese-character trademark 歌力思 #7925873 in class 18 in 2009 and obtained registration in 2011, sued Shenzhen Ellassay for infringement of his trademark registered in class 18. The first-instance court ruled in favor of the plaintiff Suiyong Wang, awarded a damage of CNY100K and ordered Shenzhen Ellassay to stop the infringing use in class 18, which was upheld by the second-instance court. The dissatisfied two parties both requested the SPC for re-examination.

The SPC overturned the earlier judgments by ruling that Shenzhen Ellassay’s use does not constitute trademark infringement, rejected Suiyong Wang’s petitions and ordered him to bear the official fees, mainly for the following reasons.

This guiding case clearly demonstrates the SPC’s strong attitude to crack down bad-faith lawsuits and curb bad-faith trademark filing. As a matter of course, the registrant is entitled to sue the unauthorized user(s) and the courts usually award damage and order the unauthorized user(s) to stop infringement. If the case had been so routinely decided, it should have been unfair to the victim Shenzhen Ellassay and the good-faith business should have suffered.

We can see that the SPC has innovatively protected the legitimate owners and earlier users who had actually extended their product lines from the class 25 goods to the class 18 goods, which have seemingly infringed Suiyong Wang’s registered trademark in class 18. However, as Suiyong Wang registered the trademark in class 18 in bad faith, the SPC rejected his petitions. This re-examination ruling is an important signal that trademark squatters will face greater difficulty in profiting from bad-faith trademark filing. What is more, if the squatters file lawsuits on the basis of their squatted trademarks, they can hardly gain damage or may even suffer loss.

The SPC reiterated its strong attitude in another later announced typical case below. 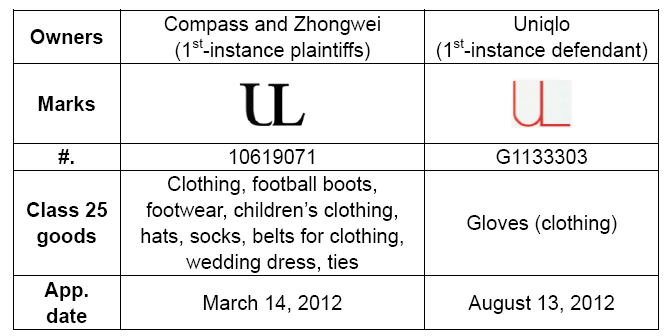 l  Lessons from the cases

Although the legitimate owners and users finally beat the bad-faith squatters in the two cases, the long process is time- and resource-consuming. We should learn at least the following important lessons:

More and more applicants have come to realize China’s first-to-file principle and would file their trademarks as early as possible. However, some applicants designate the scope of protection narrowly and fail to cover the associated goods or services, which might put them into an embarrassing situation when they want to expand the scope in business or the squatters take advantage of the opportunity. For example, in Case 1, if Shenzhen Ellassay had registered its Chinese-character trademark in class 18 at the beginning, it could have prevented the squatting and lawsuits and avoided the big trouble. An earlier and wider registration is far more cost-efficient than a passive lawsuit.

Although the China National IP Administration (CNIPA) conducts both absolute and relative examination of new trademark applications, the examiners cannot absolutely filter all the later-filed confusingly similar or identical trademarks on similar or identical goods or services. It is thus highly advisable for the legitimate owners and users to watch the Chinese trademark register and duly file oppositions, which is particularly important to prevent the squatters’ trademarks from registration. If an opposition is not duly filed, a squatted trademark can then mature into registration and the CNIPA shall issue a registration certificate, which will naturally enable the squatter and the authorities concerned and courts to enforce the registered trademark against “infringement”.

In both the aforesaid cases, the squatters at least succeeded in stopping the “infringement” on the basis of their registered trademarks in the first and second instances. Although it is possible to request for invalidation and/or non-use cancellation, the victims will be put into a less favorable situation and their business might be interrupted.

Obviously, trademark squatting is rampant in China mainly because it is profitable. When the squatters can hoard the resources or pirate others’ trademarks and later successfully blackmail the legitimate owners and users, namely the victims, who would easily make concession, the squatters will be encouraged to squat or hoard more marks and make bigger profit, which gives rise a “trademark rush” in China.

However, if the victims and authorities join efforts to cut the profit or even make the squatters suffer heavy loss in economy and credit, the trend can be curbed more effectively. The new Chinese Trademark Law amended in 2019 has created a much better environment to crack down trademark hoarding and squatting. The CNIPA and the courts make increasing decisions against the squatters.

Moreover, according to Article 68.4 of the new Chinese Trademark Law, where a trademark lawsuit is filed in bad faith, the people’s court shall impose punishment in accordance with the law. This provision can further deter the squatters who want to abuse their right to file trademark lawsuits on the basis of their squatted trademarks. We hope to see the courts’ new cases where this provision is implemented.